Campaigners urge Chancellor to put his money where his mouth is.

The biggest campaign group opposing the construction of the Oxford to Cambridge Expressway and associated one million new houses – the ‘No Expressway Group’ (NEG) – has written to the Chancellor, Sajid Javid, to highlight that the prioritisation of the environment in his March 11th budget and changes in Treasury rules to enable infrastructure investment in the North and Midlands mean that he should announce cancellation of both the Oxford to Cambridge Expressway and aspirational targets for one million houses across the Arc.

As well as acknowledging the weak business case for the project, Transport Secretary, Grant Shapps, also said that the Ox-Cam Expressway should go ahead only if there is local support for it.  NEG has provided Mr Javid with a map showing where there are community groups or Parish Councils actively engaged with the campaign against the Expressway and over-inflated housing targets.  This clearly shows the breadth of opposition to the Oxford to Cambridge Expressway and the million houses across the Arc, so far.  Individual supporters of the campaign go across the whole Ox-Cam Arc and beyond.

NEG spokesperson Olivia Field said ‘We’ve heard a lot from the Government about wanting to do two key things. To be net-zero carbon by 2050 and to address the inequality of infrastructure investment across the country.  Now is the Chancellor’s opportunity to prove the Government means it.  The South East doesn’t need the Ox – Cam Expressway when there is a new more environmentally sustainable rail link already underway.  And the areas along the Ox-Cam Arc don’t need to grow housing stock by 4 to 6 times the predicted average annual growth rate for England.”

Ms Field continued “with Glasgow hosting COP26 Climate Change Conference later this year, the eyes of the world will be on the UK and what our Government is doing now to address climate change.”

Ms Field said, ‘I hope the map we’ve sent Sajid Javid makes him and his colleagues realise what substantial and growing opposition there is to both Expressway plans and housing targets not actually based on the needs of the communities.  We hope he announces cancellation of these plans in the 11th March budget.”

NEG is continuing to urge people not to see the Government’s announcement, to “review as a priority” the Ox-Cam Expressway, during the election campaign as ‘game over’.  It is not.  It’s vital that as many local people as possible make their voices heard by supporting NEG at www.noexpressway.org where they can sign a petition to demand the Government abandons plans for the Ox-Can Expressway and associated vast housing targets.

NOTES TO THE EDITOR

The Oxford to Cambridge Expressway scheme is based on the idea of opening-up the countryside for development, including an aspirational target of one million new houses by 2050.  The National Infrastructure Commission’s 5th Studio Report shows a split by both region and type of housing across the Arc.  The target includes ‘unlocked’ homes enabled by the Expressway, London commuter homes and those in Local Authority plans. We agree more housing is needed, but not increases in housing stock for Oxfordshire >100% by 2050, affected parts of Buckinghamshire by 66%, of Northamptonshire by 74% and of Cambridgeshire, Hertfordshire and Huntingdonshire by 81%.  These growth rates are vastly greater than the Office of National Statistics predicted average 16% population increase in England by 2050.  The impact of this on our environment, pollution and infrastructure, should not be underestimated!  All those homes need infrastructure: schools, clinics, hospitals, water and electricity supplies, waste and sewage disposal etc.  For example, one form entry primary school is required for every 800 new houses.  That’s 1,250 such schools across the Arc for those one million new houses by 2050.  Developers make only minimal contributions to the real cost of infrastructure, which is ultimately borne by the Government, i.e. ultimately by tax- and rate-payers.

England has destroyed 97% of its wildflower meadows since the 1930s and more ancient woodlands in the forty years after WWII than in the previous 400 years. How much more destruction can our environment take without catastrophic declines in our life support systems?

I am writing to you on behalf of the No Expressway Group, the largest group campaigning against the Oxford – Cambridge Expressway and its associated housing targets to urge you to announce cancellation of the project, widely referred to as ‘the Arc’, in your forthcoming Budget.  Such a move would give you the opportunity to spend the money currently allocated to the project on electrification of East West Rail and in other regions of the UK which have a greater need for economic stimulus.  I believe that increasing infrastructure investment in such regions is a central plank of the Government’s vision.

We understand from media reports that you are considering “up to an extra £100bn of investment in infrastructure over the next few years.”  We note that your proposed shake up of Treasury rules, of how economic benefit is evaluated, will enable greater investment in regions such as the North and the Midlands and this will be, as you said, “transformative for every part of our country”.  Additionally, we are delighted that you have also announced that the Treasury will “prioritise the environment” in the Budget.  This is critical if the Government is to meet its “net zero carbon” ambition by 2050 and is especially important this year, as Glasgow hosts the COP26 Climate Change Conference.  The eyes of the world will be on the UK and what we are actually doing, now, to address climate change.

The area around and along the Arc is already prosperous and congested. The area does not need the Expressway and the housing targets associated with it.  Investment in transport infrastructure in this area should be focused on the electrification of East West Rail to create a low-carbon link between the two University cities and beyond.

In any case, the Oxford to Cambridge Expressway has a very weak business case, a Benefit: Cost Ratio (BCR) of 1.1to1.3:1, as presented by Highways England in September 2018 and as acknowledged during the General Election campaign by Grant Shapps.  Our own professional economist has re-examined Highways England’s business case and found it further flawed by the non-inclusion of optimism bias (as required by HM Treasury’s Green Book) and by the failure to take account of a likely switch from road to rail travel (given that both the expressway and EWR connect Oxford and Cambridge).  These two factors will significantly reduce the BCR still further.  As far as we understand, there has been no substantial re-appraisal of the Expressway, even though the quoted BCRs fall well below the threshold 1.5:1 that should automatically trigger referral back to Government for re-assessment of any highways project.

Secretary of State Grant Shapps also said that this scheme would go ahead only if there is local support.  The map at the end of this letter indicates the scale of community opposition to the Expressway and over-inflated housing targets.  And there is opposition to the project across the country, as it is rightly seen as environmentally damaging.

The No Expressway Group and various local NGOs see no justification for imposing one million new houses across the Ox-Cam Arc, a number that would more than double Oxfordshire’s entire housing stock by 2050 (and result in a minimum increase of 66% in other parts of the Arc).  The strains that this massive increase in local housing stocks would create, both in the natural environment and in the communities of the 3.3 million people already living across the Arc are, in our view, both extremely damaging and totally unjustified.  Dieter Helm, Chair of the Government’s Natural Capital Committee, says that no-one has ever achieved net environmental gain (an essential component of the Government’s 25-year Environmental Plan) at the scale of these proposals.  In our view, the local quantum of houses should be justified not in terms of past growth rates (a practice that simply increases already existing inequalities) but in terms of locally assessed need.

Your March 2020 budget is a once in a lifetime opportunity to confirm the Government’s commitment to net zero carbon, to net environmental gain and to reducing the social and economic inequalities across our nation.  We urge you to seize this unique opportunity and cancel the Oxford to Cambridge Expressway and aspirational target of one million houses.

The No Expressway Group (NEG) was established to raise awareness of the Oxford-Cambridge Expressway across the Arc.  We are not affiliated with any political party and are run on a not-for-profit basis.  We receive donations from our individual supporters but no funds from any group with commercial or other interests in the Arc proposals. In the last 12 months NEG has given talks and made presentations to villages across the Arc, from Sunningwell, West of Oxford, to Cranfield in Bedfordshire.  We have not found a single community in favour of the Arc proposals. 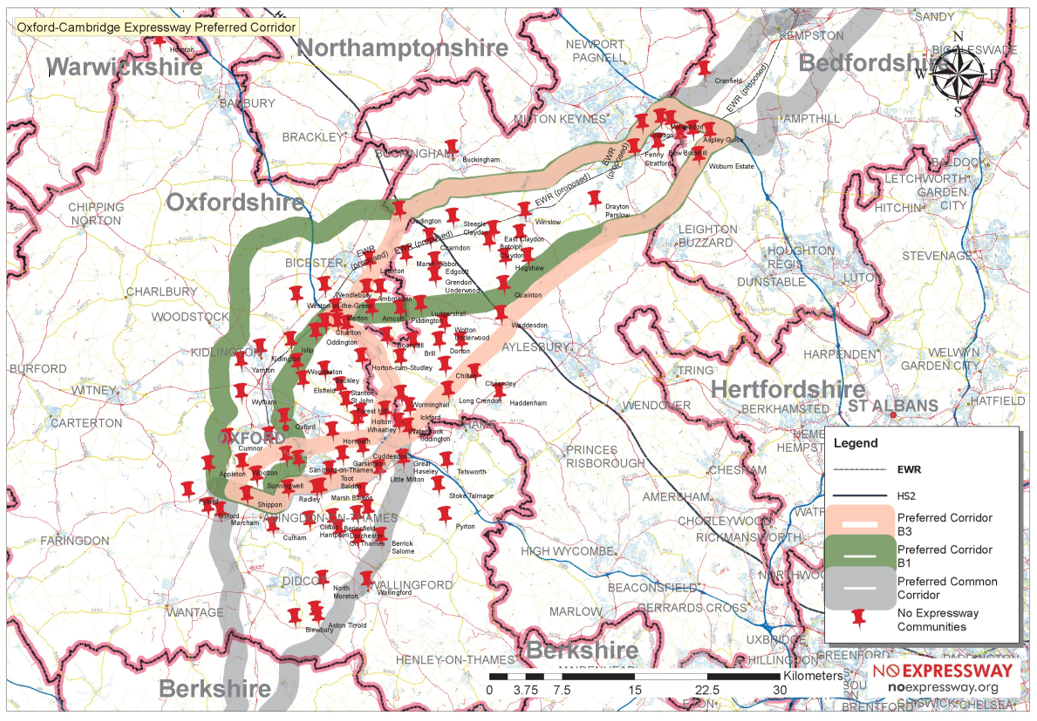 The No Expressway Group (NEG) was established to raise awareness of the Oxford-Cambridge Expressway across the Arc.  We are not affiliated with any political party and are run on a not-for-profit basis.  We receive donations from our individual supporters but no funds from any group with commercial or other interests in the Arc proposals. In the last 12 months NEG has given talks and made presentations to villages across the Arc, from Sunningwell, West of Oxford, to Cranfield in Bedfordshire.  We have not found a single community in favour of the Arc proposals.

The NO EXPRESSWAY GROUP believes that there is NO need for an Oxford-Cambridge Expressway, nor the over-inflated housing targets associated with it, and we will actively campaign against it and support the many other organisations with the same objectives.

Our environment is a national asset which should be protected for all us, our health and well-being. This is a national and not just a local issue and we will continue to strive to educate people about the threats to our countryside posed by the planned Expressway and its associated housing and development. We will fight to protect our countryside and its wildlife for the health and enjoyment of all future generations.

1st March 2020
By continuing to browse the site you are agreeing to our use of cookies.